Overhead Garage Doors and Their History

HomeBlogArticlesOverhead Garage Doors and Their History

Garage doors already existed when the inventive mind of a man called C.G. Johnson thought of making the first overhead door, back in 1921. Little did he know that his invention would completely change the route of development in the garage door industry.

It’s thanks to this man’s idea that we now enjoy overhead garage doors, electric garage doors to be exact with safety features. One sole idea created the domino effect. It brought up more ideas, created problems whose solutions resulted in revolutionary changes in the sector, opened doors to innovative solutions.

The first question to ask when one’s wondering about the history of overhead garage doors?

How did it all started with overhead garage doors? 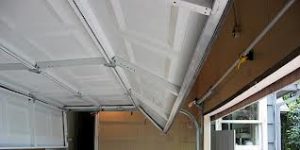 The inventor came up with the idea of the overhead opening when realized the difficulties of the classic carriage garage doors. While such primitive garage doors served well at the time, they weren’t practical at all. People had to leave empty space to open and close the swing doors, while they had a very hard to do so when it was snowing. Swinging outwards doors wouldn’t open.

What happened then? The new garage doors of the period were sliding. A little later, they could slide on their track to the side and also, fold – hence, saving space.

And then, Johnson came up with the big idea. Why not have the garage door moving upwards and somehow fold up at the ceiling? The first overhead door was born.

A few years later, the first garage door openers were created. Soon, especially around the 1950s and 1960s, things started changing quickly. People got busier. Homes got bigger. Most garages were built attached to the house. Families started having more than one vehicle. And so, there was a demand for more space, stronger and faster garage doors, convenient solutions. The sectional garage doors started to be perfected. How? Let’s see.

So far, wood garage doors prevailed. But then, aluminum, fiberglass and steel garage doors were introduced in the market and their huge success – each for its own reasons, gave room for more design ideas. If you add to that the fact that most residences were more contemporary and still there were Victorian, Georgian, and other architectural designs, you can easily realize the choices among garage door styles.

Now it was time to perfect the garage door opener 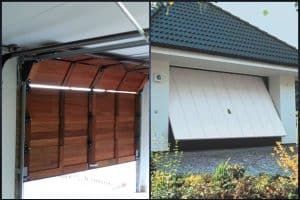 Overhead garage doors were welcome by everyone. Why shouldn’t there be? They moved upwards and thus, occupied nearly no space in the garage. Then, they were convenient to open and close, especially with the electric garage door opener. Now that the designs met all tastes too, the demand for overhead doors was skyrocketed.

And then, some accidents happened. And then some more. You see, the advantage of overhead doors to move upwards became their weak spot. One problem and the overhead door collapsed. People saw their cars get smashed – not to mention the accidents, many of which were fatal. One death is one too many and so, all those involved in the garage door industry got to work. In the 1990s, the safety standards law passed obliging the opener manufacturers to integrate safety sensors and photo eyes to their products.

Then we became eco-conscious & the insulated overhead doors were born

That’s also a great phase of the garage door evolution. With the garage door attached to the house, people felt that their energy efficiency was compromised. After all, garage doors are big in size while at the same time, some garages were transformed into living spaces.

To make a long story short, insulated overhead garage doors are almost a must now. And the evolution didn’t stop there but followed the needs of societies. Soon we had hurricane resistant garage doors, all kinds of weather seals, security hardware – all sorts of things.

At the prime of overhead doors, we missed carriage doors

Interesting enough is the fact that in spite of the abundance of overhead door styles & choices, we missed the traditional carriage design. And then, the carriage style garage doors were born and became the number one choice for most residents. But if you think about it, it was the magic movement of the electric overhead door that did the trick. I mean, what’s nicer that the nostalgic carriage garage door (appearance) that actually moves automatically as a true overhead door?